After payment, if you don't receive UGC PDF file then your payment will be refund. 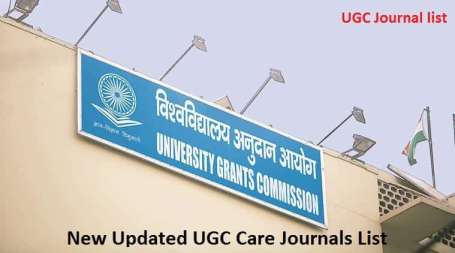 What is UGC (University Grants Commission) ?

The Full form of UGC is University Grants Commission of India (UGC India).

The University Grants Commission of India (UGC India) is the primary regulatory body created by the Indian Government in accordance with the UGC Act of 1956 under the Ministry of Human Resource Development. It has been made responsible for the coordination of Indian Universities, determination of the standards for Indian universities and maintenance of standards of higher education in India.

It acknowledges universities in India. It also spends and grants funds to universities and colleges that it has approved or recognized.

The main function of the UGC is to allocate funds to its in need institutions and to offer its impartial and respected expert advice to the Government on the strategic development and requirements for resources for higher education in India. Today, UGC manages one of the largest higher education systems in the world.

UGC (university grants commission) was modeled after the University Grants Committee of the UK that had the same duties of keeping the higher education in check.

UGC was originally created to oversee the major universities of India. The universities of Calcutta, Bombay (now Mumbai) and Madras were set up in 1857, after that the University of Allahabad was established in 1887. Now to manage them, the Inter-University Board (later known as the Association of Indian Universities) was formed in 1925. It’s primary duty was to promote university activities. It did that by sharing information and cooperation in the field of education, culture, sports and allied areas.

This was the first attempt at creating a national system of education in India which was back in 1944. The formation of a University Grants Committee was recommended.

The Report of the Central Advisory Board of Education on Post War Educational Development in India, also known as the Sergeant Report. UGC has originally designated the work of overseeing the work of the three Central Universities of Aligarh, Banaras, and Delhi. It was formed in 1945. Its responsibility was extended in 1947 to cover all Indian universities.

After the Independence, the University Education Commission (UEC) was set up in 1948 under the first Chairman Dr. S Radhakrishnan of UGC “to report on the education being provided by Indian universities and suggest any changes or improvements and extensions".

The government decided that all grants to universities and higher education institutions should be handled by the UGC in 1952. Accordingly, the University Grants Commission (UGC) was formally inaugurated by the then Minister of Education, Natural Resources and Scientific Research, Shri Maulana Abul Kalam Azad, on 28 December 1953.

In November 1956 the University Grants Commission Act was passed that positioned UGC as the apex statutory body overlooking the functioning of Indian universities and higher education in india.

The UGC, however, was formally inaugurated and set up only in November 1956 as the apex statutory body of the Government of India through an Act of Parliament for fulfilling its purpose of coordinating, determining and maintaining the standards of university education in India.

In 1994 and 1995 the UGC decided to centralised control of its operations by setting up six regional centres and offices at Pune, Hyderabad, Kolkata, Bhopal, Guwahati and Bangalore. The head office of the UGC is located at Bahadur Shah Zafar Marg in New Delhi, with two additional offices operating from Feroze Shah Road and the South Campus of Delhi University as well.

Sir Shanti Swaroop Bhatnagar an Indian colloid chemist, the academic and scientific administrator was the first Chairman of the University Grants Commission of India (UGC). He was a brilliant Chairperson who brought in numerous revolutionary changes. Professor Dhirendra Pal Singh is currently the chairperson of the University Grants Commission (UGC).

He is the most calm and smart Chairperson heading UGC.

He is credited to have pitched numerous revolutionary ideas.

The post of Secretary of the University Grants Commission (UGC) was first headed by Shri Samuel Mathai. A brilliant secretary thus far. It is currently being headed by Professor Dr. Jaspal Singh Sandhu, a very charming man.

What is UGC CARE?

UGC has set up a Consortium for Academic and Research Ethics (CARE) to match global standards of high-quality research in all academic disciplines under its purview and to ensure prevention of academic misconduct that includes plagiarism in academic writing among students, faculty, researchers, and staff.

The UGC CARE has been set up to identify, continuously monitor, report and maintain “UGC-CARE Reference List of Quality Journals”. It’s a standard quality that every journal must follow.

A journal not following this reference list is considered invalid.

Why is UGC/ UGC Care important?

UGC is the lifeline of the Indian Education System. Its main priority is to oversee all the things related to Higher Education In India. It was established for this sole purpose, to maintain quality and harmony among universities, government, and community.

UGC has many ways of doing there work, such as through the standard of UGC Approved Universities and UGC CARE which establishes a Criteria for the scientific journals.

A strict set of standards created by UGC ensures that everything is in order and every university is adequately funded and looked after.

As we know that UGC is the apex statutory body which controls the functioning of the Universities, but how does it do that? The main aim & role of UGC in higher education is to provide funds to universities.

It is also supposed to coordinate, determine & maintain the ethics in institutions of higher education. It ensures that every university follows certain rules if it is supposed to function as a UGC approved university.

It also promotes and coordinates university education, frame rules on minimum standards of education, and setting standards for examination like ICAR NET, UGC NET & CSIR UGC NET. UGC’s ultimate goal is to bring every approved university to become standardized and under the same umbrella so there are no discrepancies in the quality of education being provided and that no student feels cheated.

The commission upholds the interpretation and cooperation among the universities, government and the community.

There is supposed to be minimum discrepancies among the expectations and deliverance among them. UGC has also set some standards and rules for the universities for being ‘UGC Approved Universities’. With the growth of higher education in India, many top, medium, and small universities are being established day by day. Every university that wishes to be UGC approved must meet its criteria if it’s supposed to get the tag of quality and excellence.

Among all these universities, there are many universities that are fake and not fit as per the UGC standards and are ineligible to award degrees to students. Therefore, UGC releases a list of such fake universities to help students identify these rejected universities.

Journals are the medium through which budding candidates publish their articles about their research. These sources are made available because of the UGC.

If the aspirants choose any private journal except for UGC care list for their research other than that, it is not considered as valid. As of now, the UGC Approved Journals list has now been replaced by UGC – CARE.

UGC aims to stimulate, empower and help grow the Indian academia through its “Quality Mandate”. UGC aims to eradicate any plagiarised and sub-par material that might damage the reputation and standards of international research.

How to publish the paper in UGC approved journal?

If you are looking for the publication of the paper in UGC approved journal then in the following there is the complete information, for this, you have to follow all the steps.

• Submit the research article and manuscript in .DOC/.DOCX file format via email or online submission. For online submission, you have to click on the official link. Through the mail you have to write down the Submission of Manuscript/Research Paper: Name of Paper” along with the paper category and also the name of author, designation, contact number in the message body of the email.

• After the submission must prepare the research paper or manuscript in the format of the paper and the language must be English. After this, you can track the submitted paper status online by login author account .for login. And you have to use the paper registration id.

• After this, you will receive the paper to accept or reject notification. If you get rejection then you have to make modifications according to the review committee.

• When the payment of the publication fees, submitted then you have to submit the documents in single mail to editor undertaking by Author Form that are asked for submission.

Journals in Science and Technology 2023

Journals in Arts and Humanities 2023