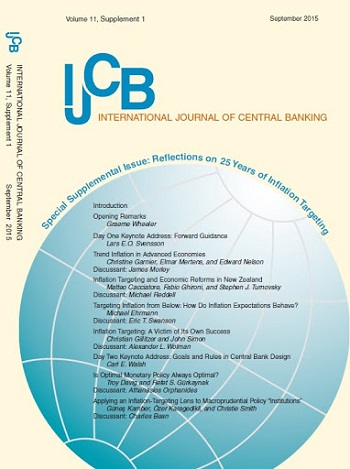 International journal of central banking - In July 2004, the Bank for International Settlements (BIS), the European Central Bank, and each of the Group of Ten* (G-10) central banks announced their plans to support the development of a new publication focused on central bank theory and practice. Other central banks were invited to participate in this joint project, and there are now 55 sponsoring institutions.

From its initiation, the sponsors were committed to ensuring that the International Journal of Central Banking (IJCB) offer peer-reviewed articles of high analytical quality for a professional audience. The primary objectives of the IJCB are to widely disseminate the best policy-relevant and applied research on central banking and to promote communication among researchers both inside and outside of central banks.

Roger W. Ferguson, Jr., then Vice Chairman of the Federal Reserve Board, first proposed the idea of such a journal and discussed the concept with several BIS colleagues and with Ben S. Bernanke, then Chair of the Federal Reserve Board of Governors, who agreed to serve as the initial managing editor. Charles Bean, then Chief Economist of the Bank of England, strongly supported the project, and the journal's governing body, comprising representatives from the sponsoring institutions, was established.

The journal's managing editor, co-editors  and associate editors coordinate solicitation and review of articles across a range of disciplines reflecting the missions of central banks around the world. While featuring policy-relevant articles on any aspect of the theory and practice of central banking, the publication has a special emphasis on research bearing on monetary and financial stability.

Journal of Banking and Finance

International Journal of Banking Accounting and Finance (IJBAAF) provides an outlet for empirical research on all aspects of accounting, banking, and finance. Theoretical research with the potential for empirical applications and more...

Indian Journal of Finance and Banking